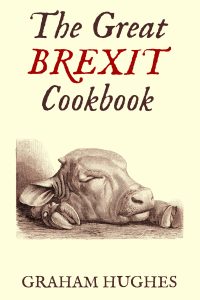 Whether you voted for your grandchildren to feel the icy chill and gnawing hunger of (what we thought were) bygone winters because you hate them, or because you were too stupid to see how you were being played like a cheap piano by the privately-educated elite, this book is for you!

Now that we’ve imposed crippling trade sanctions on ourselves as if we’ve just lost a major war, and rid our majestic kingdom of them pesky foreigners who came over here and did all the jobs we didn’t want to do, we are finally free to eat the godawful food of our once and glorious past: cheap and tasteless dishes of low nutritional value such as stewed pigeon, bone soup and boiled sheep’s head.

May the miserable and restrictive future that you have voted to foist on your offspring taste as delicious as the dishes contained within.

This is an advisory cookbook. While the recipes are real, your constitution might not match that of your syphilitic forefathers. The author takes no responsibility for injury, sickness, death, destruction or economic devastation that may or may not arise as a direct or indirect consequence of preparation or consumption of the meals laid out in this august compendium.