ATBOSH Media Ltd. developed a series of educational iPad apps for The Cleveland Play House’s Compassionate Arts Remaking Education (C.A.R.E.) program. The apps were made possible by the Arts in Education Model Development and Dissemination (AEMDD) grant from the U.S. Department of Education and are distributed to the app store by Lemming Labs Limited.

If you have an iPad you can download them directly from the app store.

EmotionMatch! – (iPad app link) is a simple matching game. Select one face and then select another that matches it. Race and gender don’t matter – just try and match the emotions.

There are 14 different faces for each of the 16 different emotions!

There are 3 hint levels you can choose from.

Try to clear the board with the fewest number of tries!
If you get a 50% accuracy rating the game will show you your time! 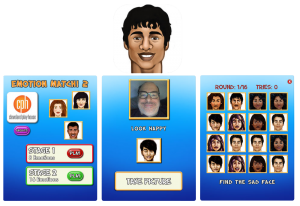 Emotion & Me aka Emotion Match! 2 – (iPad app link) is a matching game designed to help players identify emotions, but in this game you get to make the faces yourselves or even with a friend! Before the game is played, you decide if you are going to match your own face, a friend’s face, or the built in drawings. You are prompted to pose for each emotion and then the game begins. Try to match the emotion to the face!

There are 14 different built in faces for each of the 16 different emotions!

Try to match the faces with the fewest number of tries! 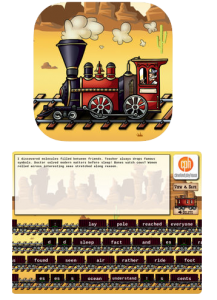 Text Train – (iPad app link) is an app for writing poetry and stories.

First, select which word pool that you want to work from:

Each word pool affords its own experience and challenges and you are encouraged to try them all.

Remember, if you don’t know what a word means or don’t want to use it – just don’t use it!

Watch as the trains move across the tracks carrying different words. To add a word to your story simply touch it. Keep adding words. You can add a variety of punctuation marks too! If you don’t like a word you chose, you can always touch the Caboose to delete the last item added.

Be patient, new words are always coming around the bend!

The word pools contain verbs in many different tenses, the nouns tend to be singular. Every so often you will see an S, an ES. or an ‘S roll by. These can be used to create a plural or a possessive as needed. Just be careful not to make words that don’t exist!

Costume Maker (iPad app link) is allows you to select an actor (or two) and place them against a backdrop and configure their costume in an almost infinite number of combinations. The final composition can be saved, emailed, and even shared across social media!

We don’t exaggerate when we say an almost infinite number of combinations. For each piece of clothing there are 9 choices (plus an option not to have one), in addition to it’s original color it can be colored in one of 24 different ways which creates the possibility of 226 options for each clothing layer.

These costumes (per gender) can be placed on an actor of one of 6 different races resulting in a possible 799,469,473,001,856 (seven hundred ninety-nine trillion, four hundred sixty-nine billion, four hundred seventy-three million, one thousand, eight hundred fifty-six) combinations of costumed actors per gender.