No Life But This: A Novel of Emily Warren Roebling 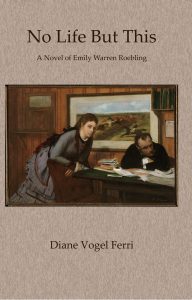 No Life But This: A Novel of Emily Warren Roebling by Diane Vogel Ferri

It is 1869, and Emily Warren Roebling’s father-in-law, John A. Roebling, the chief engineer of the Brooklyn Bridge, has suddenly died and left the job to his son, Emily’s husband, Colonel Washington Roebling. Washington succumbs to a mysterious illness at the beginning of the project, and Emily becomes a liaison and field supervisor for the bridge. She puts aside her own ambitions as an educated woman while devoting herself to her son, John, her husband, and the bridge. She faces many indignities as a woman in a world of men. Emily Warren Roebling was a remarkable woman who lived from 1843 to 1903, and whose accomplishments would seem unbelievable if they were not true. She was an ardent feminist who was well ahead of her time. There is even a plaque dedicated to her on the Brooklyn Bridge.