A Bird In The Deep: The True Story of The USS Partridge 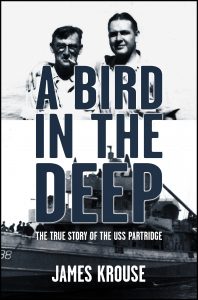 A Bird In The Deep: The True Story of The USS Partridge by James Krouse

Deep in the English Channel lies the wreck of a US Navy vessel sunk during the Battle of Normandy. Her rotting decks and silt-filled chambers once staged a human drama that may have inspired Herman Wouk’s World War II novel, The Caine Mutiny. This is the true story of the USS Partridge and the real-life heroes who served aboard her in some of the most treacherous waters of the war. The crew’s struggle to serve under a captain losing his grip on command brought them to the brink of mutiny, just as the ship was facing her greatest mission yet. From the submarine-infested Caribbean to treacherous North Atlantic crossings to Normandy beaches, A Bird in the Deep tells a story of friendship, heroism, and the true nature of leadership during a time of war.