The Life of Frederick Maehle from His Memoirs 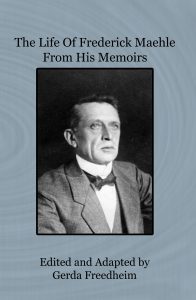 The Life of Frederick Maehle from His Memoirs by Gerda Freedheim This is a story of a family…at least a part of it. It is based on the memoirs of the author’s grandfather, Frederick Maehle who was born in 1871. Frederick, known as Fritz, lived with his family in the city of Lodz. During WWI, when Lodz was under siege; the schools were closed, his work was erratic so he would tell his children stories about his ancestors, his childhood, and his youth. He began his memoirs in 1913. Although he ended writing the memoirs in 1938, his son, Kola, continued them from notes and journal entries he found after the war. The last journal entry is dated May 20, 1940. Kola’s wife Hilde translated most of the manuscript, Gerda who adapted the memoir, had Ursula translate the remainder. Frederick’s writings are painfully intimate in which he reveals his heart and his soul. This story is not one of happiness and prosperity, it is a story of survival of a family devastated and fragmented by World War I, then the Great Depression, and finally WWII.