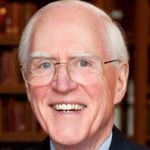 Jon A. Lindseth is a book collector and bibliographer. He co-edited the 2015 book Alice in a World of Wonderlands: The Translations of Lewis Carroll’s Masterpiece which was nominated for the Breslauer Prize for bibliography. It discusses the translations in 174 languages in 60 alphabets. There were 251 contributing writers all recruited by Lindseth. He is an emeritus trustee and a Presidential Counselor of Cornell University and has made numerous book donations to their library second in number only to those by the first president of Cornell. He is a member of the American Trust for the British Library, a Fellow of the Morgan Library and Museum and a member of their Printed Books Committee. His Lewis Carroll collection will go to the British Library. He is a former board member of the Rare Book School at the University of Virginia. Lindseth is an engineer by training and brought the electric toothbrush and the ear thermometer to market. He has had research and production facilities in a number of American cities plus Manila, Hong Kong and China. The Harvard Business School has written fourteen cases on his companies. There is a forthcoming book about a Lindseth collection titled The Use Of Fables In Jewish Culture to be published by the Cornell University Library.

Alice in a World of Wonderlands: The English Language of the Four Alice Books Published Worldwide